What’s a speed limit sign doing out here in the woods? 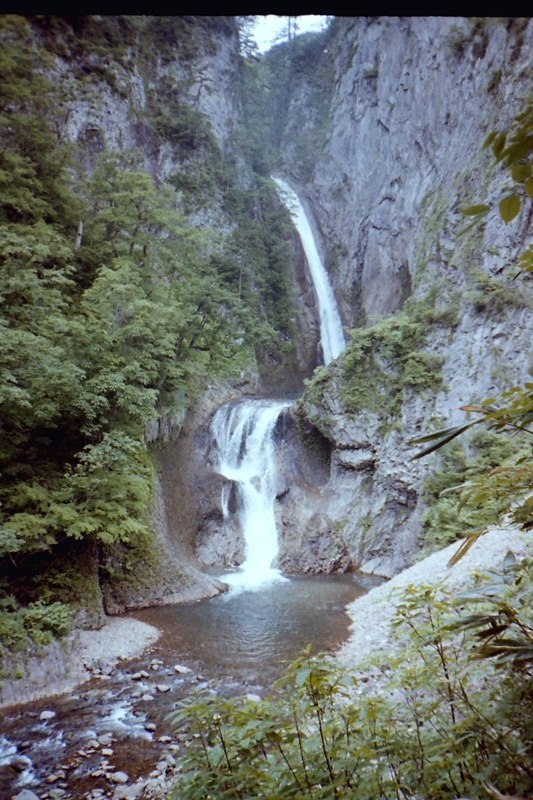 Little Waterfall in the Woods

After a long hiatus, I scanned in another roll of the negatives from my Japan photos.  It’s always exciting for me to see them, since I don’t have prints of any of them.  Unfortunately, tonight I only have time to post this one photo.  It’s a waterfall way up in the mountains of northern Japan.  I think this may be the Oirase River, but if not, it’s in an area close to that river.

Not many people, even Japanese people, have seen this sight.  I hiked to it during a backpacking/camping trip with three other guys.  I found I had written down their first names, but I have no idea what their last names were.  I’m not sure whether I’m going to mask their faces when I post their photos, but in any case, I won’t post their names.

No, I didn’t get a photo of the speed limit sign (in kilometers per hour), but I assure you it was there.  We walked by it on the trail, puzzled at its presence and wondering why it had some kanji written on it.  About a mile up the path later, it dawned on me: that kanji said “waterfall” in Japanese.  The sign had nothing to do with limiting our speed; rather, it was a marker telling us to “turn here for waterfall.”

We returned to the sign and proceeded down the hill through what could only be described as a jungle.  Yeah, I know it’s not politically correct to say “jungle” rather than “rain forest.” So … jungle.  Jungle, jungle jungle.  Jungle.  Jungle again.  The waterfall was beautiful, so it was well worth risking snake bite and attacks from exotic arachnids.

I’ll post more photos from this trip when I get time.

This entry was posted in Japan. Bookmark the permalink.