At least this time I didn’t do the skin-head wig with the samurai top-knot like I did for a costume in my late twenties (don’t ask me how long ago that was!).  I’m surprised how well this came out, since I was holding my katana (samurai sword) in one hand and my cell phone in the other.  I could see the pose in the bathroom mirror, and the hunter-green shower curtain came out almost pitch black with the camera flash.  Perfect.  I’ve even been out walking in the sun, so my skin is becoming bronzed enough to be convincing.  I am now using this shot for my facebook profile.

If I were going to re-do this, I would try to make my eyes a little less round, but it was hard enough to do by myself that I don’t think I will even try.  You undoubtedly can’t tell it from the photo, but the kimono I’m wearing came from the Nebuta Festival in Aomori, Japan.  If you ever go there, be wary of vendors selling yaki-tori.  That’s usually grilled chicken kabobs, but after they let me taste their wares, they packaged me up a box of nothing but chicken skins on long toothpicks.  All that for 500 yen (about $4.50, in 1989 dollars).  When I got back to the bus, I was starving and my mouth was watering.  When I opened my parcel, however, I was fit to be tied.  I really could have used that sword back then! 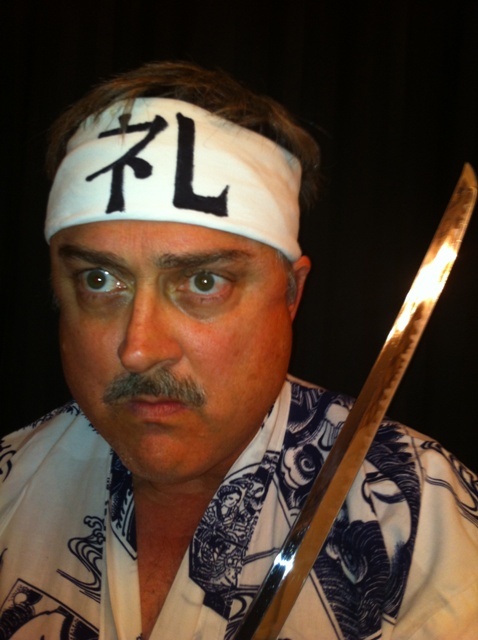 Self portrait, with “Rei” (respect) headband

This entry was posted in Japan, Photos. Bookmark the permalink.